Rice, redefined. Paella, the comforting Valencian rice dish of humble origins, is both the name of the recipe and the pan in which it’s prepared: a round, flat-bottomed pan to give the rice maximum surface contact. Traditionally, grilled seafood paella is cooked over an open fire, and there are still many shops in Spain that cook over wood. We like the smoky flavor it imparts to the seafood in our version as well. And we love any excuse to light a fire.

Light a full chimney of charcoal briquettes. When they ash over, bank them onto one side of the grill for direct heat, leaving the other side open for indirect heat. Heat until you can hold your hand over for 1 long minute. Put the paella pan over the fire and cook the chorizo in the oil, stirring until the fat renders out and the chorizo crisps and browns, about 3 minutes. Transfer the chorizo with a slotted spoon to a bowl and set aside, allowing rendered fat to remain in the pan.

Add the onion, garlic, and paprika to the pan, season with the salt and as much pepper as you like, and cook, stirring occasionally until the onion softens, 3 to 4 minutes. Rotate the pan and shift it to the cooler part of the grill as necessary to avoid burning. Stir in the tomatoes and cook, covered, until the tomatoes have darkened, about 4 minutes. Add the saffron to the wine, pour in, and cook, with the grill covered, until the wine is mostly reduced, about 5 minutes. Add the rice, stirring to coat evenly. Stir in 4 cups of the seafood stock and spread the rice into an even layer. Close the grill and let simmer with the vents open until most of the liquid has been absorbed for about 15 minutes. If the rice is too dry at this point, add more stock. Rotate pan halfway through and adjust heat as necessary to maintain a simmer.

Nestle the clams around the edge of the pan, cover, and cook until the clams just begin to open, 5 to 7 minutes. Sprinkle the peas and chorizo over the rice and arrange the shrimp around the pan. Return the pan to the grill. Close the grill and continue to cook until all the clams open and shrimp are cooked through, and rice is tender for about 9 minutes.

Remove pan from grill and cover with foil. Let steam, undisturbed for 5 minutes. Uncover, discard any clams that haven’t opened, and sprinkle with parsley. Serve.

Carbon steel is the most traditional pan, but it will rust, so it requires proper seasoning and care. Enamel-coated pans conduct heat as well as carbon, but the coating makes it easy to clean.

Choose your store-bought seafood broth carefully. Some have seasonings that may throw off your flavor. Best to make your own if you can. 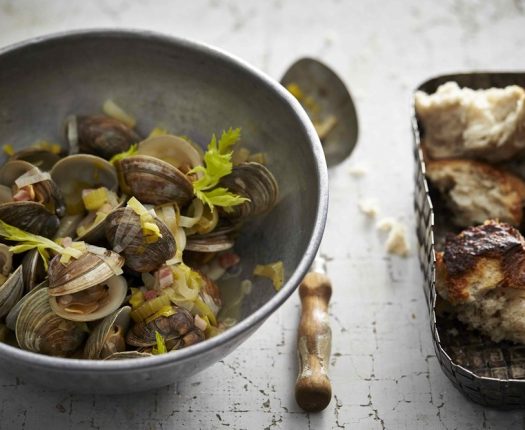